It takes less than a minute. If you already have an account login.

Enter your email address and we'll send you a link you can use to pick a new password.

By Lori Ashenfelder in Market Updates with 0 Comments

NAR’s Pending Home Sales Index—a forward-looking indicator based on contract signings—increased 8.8% in August to a record high of 132.8. (An index reading of 100 is equal to the level of contract activity in 2001.) Contract signings are now 24.2% higher than a year ago.

“Tremendously low mortgage rates—below 3%—have again helped pending home sales climb in August,” says Lawrence Yun, NAR’s chief economist. “Additionally, the Fed intends to hold [its] short-term funds rates near 0% for the foreseeable future, which should, in the absence of inflationary pressure, keep mortgage rates low, and that will undoubtedly aid home buyers continuing to enter the marketplace.”

The housing market has made a strong recovery since the outbreak of COVID-19 first struck the U.S. this past spring, which led to a sudden downturn in sales. Yun says pending sales contracts are now at an all-time high. However, he cautions that won’t necessarily translate to a record number of home sales, because not all contracts lead to closings and there are sampling size variations. Yun also notes that the elevated sales likely are not sustainable due to ongoing inventory shortages of homes for sale.

“Home prices are heating up fast,” Yun says. “The low mortgage rates are allowing buyers to secure cheaper mortgages, but many may find it harder to make the required down payment.”

The metro areas where housing markets have seen the largest recovery or even exceeded their previous January levels, as of Sept. 19, are Seattle-Tacoma-Bellevue, Wash.; Las Vegas-Henderson-Paradise, Nev.; Boston-Cambridge-Newton, Mass.-N.H.; Denver-Aurora-Lakewood, Colo.; and Philadelphia-Camden-Wilmington, Pa.-N.J.-Del.-Md., according to realtor.com®’s Housing Market Recovery Index. 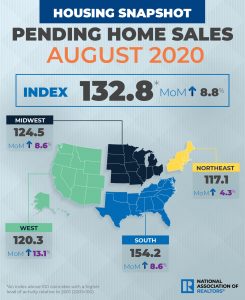